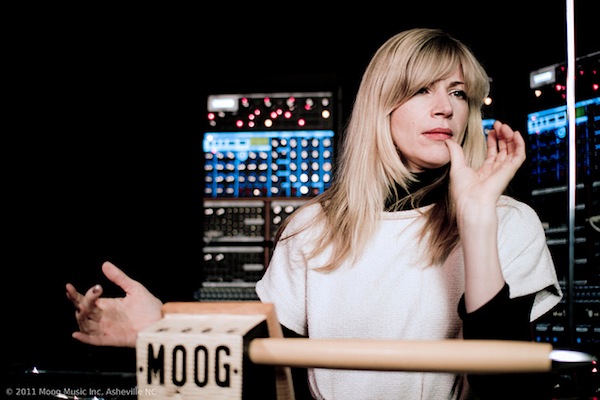 Best known for her theremin style, composer/musician Dorit Chrysler also has a prolific recording and performing career as a vocalist, guitarist, keyboardist, producer, and engineer.

Making her professional vocal debut at Austria‘s Opera House Graz at the age of seven, Dorit went on to form her first rock band at thirteen and began working towards her Master‘s Degree in Music Science at eighteen.
Moving to New York, she was fronting a number of notable bands, including New York rock quartet Halcion.
Dorit has shared live bills with acts as diverse as Alexander Hacke, Amon Tobin, Dinosaur Jr., Blonde Redhead, Marilyn Manson, Mercury Rev, Oingo Boingo and Echo & The Bunnymen.
She has also collaborated and recorded with artists & producers such as Tocotronic, Elliott Sharp, Judah Bauer (Cat Power), Matt Johnson (The The), Cluster, Chicks On Speed, Electric Indigo, Neon Indian, Gordon Raphael (Strokes, The), Lary Seven, Jason Forrest, Oh Land, Foetus, Ultra Vivid Scene & Gibby Haynes, Trentemøller. As a regular at Joe McGinty‘s notorious Loser‘s Lounge review in New York, Dorit performed “Hey Cowboy“ for her idol, the song‘s composer Lee Hazlewood. This highpoint of Dorit‘s career was topped off by Hazelwood‘s compliment that she sang it “better than Nancy (Sinatra).“
Embarking upon a solo career in 2000, Dorit has since performed worldwide, ranging from notorious dives (CBGB) to concert halls (Disney Hall in LA, Lincoln Center NY, Vienna Konzerthaus), festivals (Roskilde Festival, Moog Fest, Coachella) and art events (Venice Biennale, Berlin Biennale, Art Basel, PS1, London Royal Art Academy, St. Petersburg Hermitage, Louisiana Museum).
Since 2005 she has toured the US, Japan, Australia, Canada, Brazil, & played Paris, London, Berlin, Belgrade, Stockholm, Helsinki, Mexico City, Reykjavic, Prague, Bukarest, Vienna, Switzerland, Italy, Spain, Portugal & New York. After an assortment of film & TV soundtracks, compilations, and singles, Dorit released her her first solo record featuring her theremin in 2004.
Produced, recorded, engineered, and performed by the artist herself, “Best of” sold out quickly. In 2005 “TinyThrills“ a special Collectors Edition featured a collaboration with Gordon Raphael (Strokes, The).
In 2006, Dorit appeared with Electric Indigo on the Chicks On Speed “Girlmonster“ Comp, and on Monika Enterprise, “4WomanNoCry“. She produced a 10 piece Theremin Orchestra Concert at the LA Disney Hall in 2008 and headlined “Art’s Birthday” at Moderne Museet Stockholm. She has written scores for Jesper Just’s films, to be seen in permanent collections at MOMA & the Guggenheim Museum.
Dorit is an endorsed Moog Artist. In addition to her solo career, she has founded the New York Theremin Society.
In 2011 she self-produced her second album “The Sea of Negligence” that features collaboration with Trentemøller and Judah Bauer.
Dorit has been also performing as thereminist in many Trentemøller’s acclaimed live acts.

“Dorit Chrysler is the theremin’s sensual muse, its siren—hardly anyone else can generate such charming music with this mysterious violin of ether waves.”

upon first encounter with the theremin I was intrigued by its sonic possibilities, its capacity of expression and the fact that the instrument deserved to be taken serious and to be explored. It was simply love at first sight

i call it the *Houdini Effect*

and where did it happen?

my first impression was encountering a theremin at a friends house. Then i saw Clara Rockmore play and was just in awe of this unique instrument.

Finding my own voice of expression through different tools — the theremin can be so emotional and is a direct link to body and heart. It became an extension of myself.

Prospects for theremin and its place in modern music space — how
you see them? For what qualities you value this tool?

I anticipate the theremin being more present and dominant in contemporary music in days to come, a new generation of players as well as instruments will demonstrate what the theremin is capable of — I am very optimistic and excited about this and vow to do my part in spreading the word.

I have moog theremins and a custom made theremin by Charlie Hobbs. i find each instrument has its own strength and weakness so i am using them all in different ways where needed. the new moog there mini surpasses the capacity as a traditional instrument, i am curious to see how people will end up using it