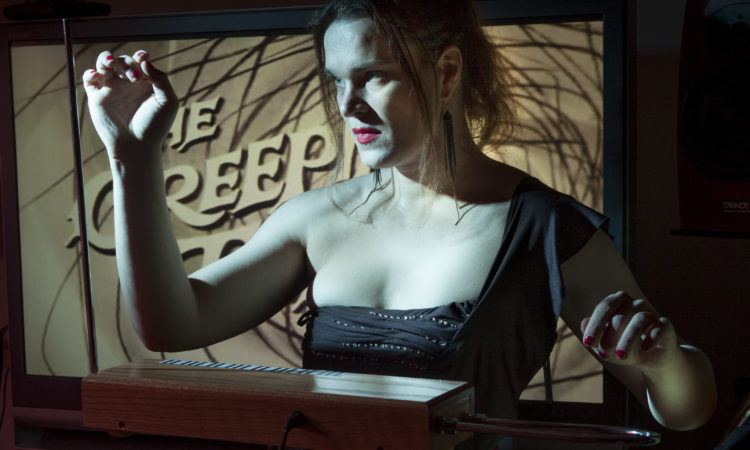 Bass Cadet aka Susanna Viljanmaa is an artist who’s one of the few thereminists and the only playing instructor in Finland. She has toured over the country perfoming movie concerts and other gigs on a theremin and with synthesizers.


So please, if you have anything that you would like to say publicly about Clara Rockmore, her creativity and her anniversary, – please write.

I admire her passion and dedication towards the instrument, helping to develop it further. The most enthusiastic one of my students shares the same background as Clara Rockmore: she also had to give up violin due to tendinitis and dreamt of learning to play the theremin for twenty years before meeting me. Also my lover read the story of Clara Rockmore and the theremin to his daughter just before meeting me.

I am a multi-instrumentalist so I’m interested in instruments in general. The documentary had been aired on the Finnish national television. I knew a little about theremin already but saw one at a gig in Helsinki in 2002 and asked the player how did he get it. So I ordered a Big Briar (Moog Music back then had no right to use their original name) Etherwave DIY kit straight from the States. My father who was a radio pioneer said many of his friends built theremins just to realize they can’t play one and predicted I would end up with the same problem. Back then Youtube didn’t exist and I had no VCR system anymore so I had no clue on how to play one. I had to try different ways and ended up playing holding my palm on top of the body and drew a set of piano keys to quickly find different notes during large intervals. Even then if I leaned too much over the instrument I went out of tune. Later on I tried to find out a way to play with my arm on the air. My first assignment was to play Finlandia and some accordion jazz of Matti Viljanen at the retirement party of an army officer of the telecommunication corps. I found out my intuitive way to play and still use it though I teach another technique: the 8-position-technique introduced my Carolina Eyck.

Most likely the first time I’ve heard theremin was in the songs of Jean Michel Jarre. Back then I didn’t know it was theremin. My first impressions came from the ’50s b movies. I produce electronic music so I was initially interested in creating different soundscapes and effects with it but later on learned about virtuosos and the possibility to play a musical scale with it. It reminded me about cello or a musical saw. And arranging it seems very much like the musical saw!

Throughout my life I have been interested in music and it’s impact. I’ve written scores for film and demoscene productions and like different challenges on how to reshape a video with a different soundtrack for example. But I also like to play songs on an instrument that it’s gerenally not used for. Like playing heavy rock music on an accordion I perform different unexpected music on theremin: in addition to the songs people think are originally performed on a theremin but in reality aren’t (Star Trek TOS theme, Good Vibrations, The X Files theme) I also play a lot of rock music (Rammstein’s Engel, MUSE’s Knights of Cydonia and Hysteria, Portishead’s Humming and Mysterons, Depeche Mode’s Walking in my shoes) and movie soundtracks (Blade Runner, The Snowman). Usually theremin has been the most interesting thing of my performances to people and kids are super fascinated in it. Most of the people don’t even know about the instrument.


Prospects for theremin and its place in modern music space – how you see them? For what qualities you value this musical instrument?

I have already used theremin in my original compositions for film and the demoscene but I aspire to introduce and teach it to new people. I had to prove my father was wrong, that I will learn to play it but also share my knowledge and skill to other people. Some years ago I tried to network with other thereminists in my country but could count all I could find with one hand. And another player said there aren’t many of us. Teaching has been the most effective way for me to also learn myself since I have to really focus on how I have been doing things while playing. I noticed I have several advantages to other people: hypermobility, long arms and lean shape. My massagist realized that most virtuosos are hypermobile and also taught me the best playing tip I’ve had so far: keeping my shoulder relaxed while playing. When you are nervous you keep it stiff which blocks the nerves and makes movements jerky. I’ve written some articles about the theremin in Finnish magazines too and currently I tour over the country performing a movie soundtrack live on a theremin and synths.

I have two Etherwave theremins: one from the Big Briar era and another one with a Moog Music label. I figured out they have different uninterchangeable volume antennas but also their power supply units aren’t interchangeable despite having the same connector. Also it seems Moog Music ran out of the adjustable coils they used to have and replaced them with a Coilcraft graphite core substitutes. I didn’t know that when I tried to tune my student’s theremin; she had lost the original plastic tool and we had to use a metallic hex driver which snapped the coil and I had to borrow my second theremin to her until I got to fix it. I really regret not buing an Etherwave pro theremin when they were new. I already agreed to buy one when it was put on sale until I realized the price tag was $5000, the same amount the seller had paid for it

Daily practice is the key to learning it quickly. Having an ear for perfect pitch isn’t mandatory but it helps learning. Carolina Eyck has really good instructive videos and also a book about playing. It is important to learn to keep a stable posture and your arms relaxed. I once wondered during the daily practice why it sounded so horrible until I realized I kept a ring in my pinky finger. Metal is more dense than bone and muscles!