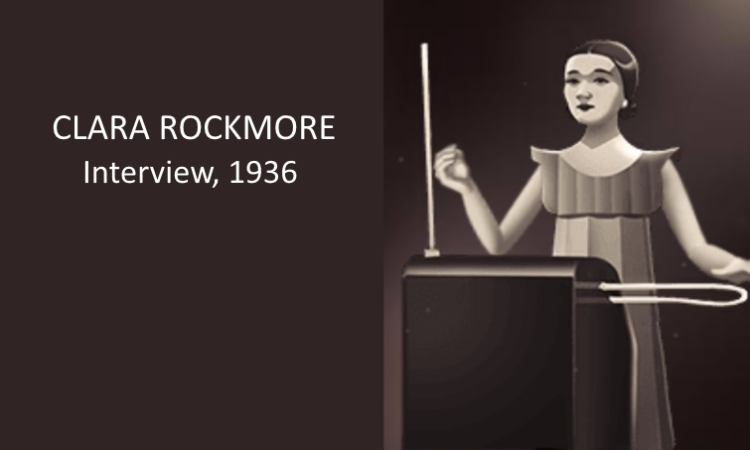 What is its real name and who invented it?

Its real name is Theremin, and it was named after its inventor, Leon Theremin, a Russian of French descent, in the year 1919. Prof. Theremin is a well known scientist.

What is its range?

The instrument to be used in the concert is approximately four and one-half octaves. It can be varied, however, even much larger.

How much is it played?

Not extensively as yet. There is no literature to date in existence for the Theremin, so of necessity the program has to be chosen from that of voice and other instruments. Consequently the difficulty of performance is increased, for perforce the composers were at no time able to consider the characteristic individuality of this instrument.

Is it used in orchestras?

It has been used by Leopold Stokowski of the Philadelphia Orchestra- possibly he is the only one to have adopted it for orchestral use thus far. Stokowski believes in its possibilities very strongly.

Does the loud speaker distort the tone?

Absolutely- otherwise it would be inaudible.

Can it be plugged in anywhere?

Yes, for alternating current or through a converter to direct current.

Will it blow out fuses?
No.

Does your body between it and the loudspeaker play any part in the tone?

Yes, the body serves a conductor and when it is brought into the sensitive field surrounding the vertical antenna, the field is so affected that sounds are produced.

Do you feel ether waves going through you?
No.

How would the sound be affected if you moved while playing?
The pitch would be somewhat changed.

Do you purposely hold the first finger and thumb in a circle?
Yes, for steadier vibrato.

Is it tiring?
A little more than other instruments, perhaps; because of the necessary control of the body.

What are its limitations?

As it stands today, its limitations show up more in technique requiring great velocity.

Yes, very much so, particularly those of distinctly progressive nature. They feel that the Theremin is an instrument of the future, and that as soon as musical literature for it has been developed, it will take on more importance and in wider fields.

Why do you move your right arm and fingers towards upright bar and away from it?

As the right hand approaches the antenna, the pitch of the sound becomes higher, and as the hand is withdrawn, the pitch becomes lower.

Please explain the motion of the left wrist, hand and arm toward and away from the circle on the left side of the instrument.
The left hand not only controls the volume, the further away the louder and the nearer the softer, but all rests, bow effects, and nuances are achieved with motions of the left hand and fingers.

Do you tune the Theremin?

Yes, I do- there is a little knob on he front of the instrument, which may be turned to any desired note while I stand stationary before it. However, an added difficulty is the fact that as the instrument warms, the tuning changes very rapidly.

I notice you use the fingers as well as the right hand.

Yes, I use the fingers, for more rapid programs and to eliminate the slide from one note to another.

What would happen if someone were to pass in front of the instrument while you play?

The pitch would be completely distorted, and the volume affected, as that person would also be in the electro-magnetic field.

What do you think is the place of the Theremin in the future?

That of a solo instrument, as a part of a chamber music ensemble, and a very valuable addition to a symphony orchestra because of its unlimited volume and different tone color.