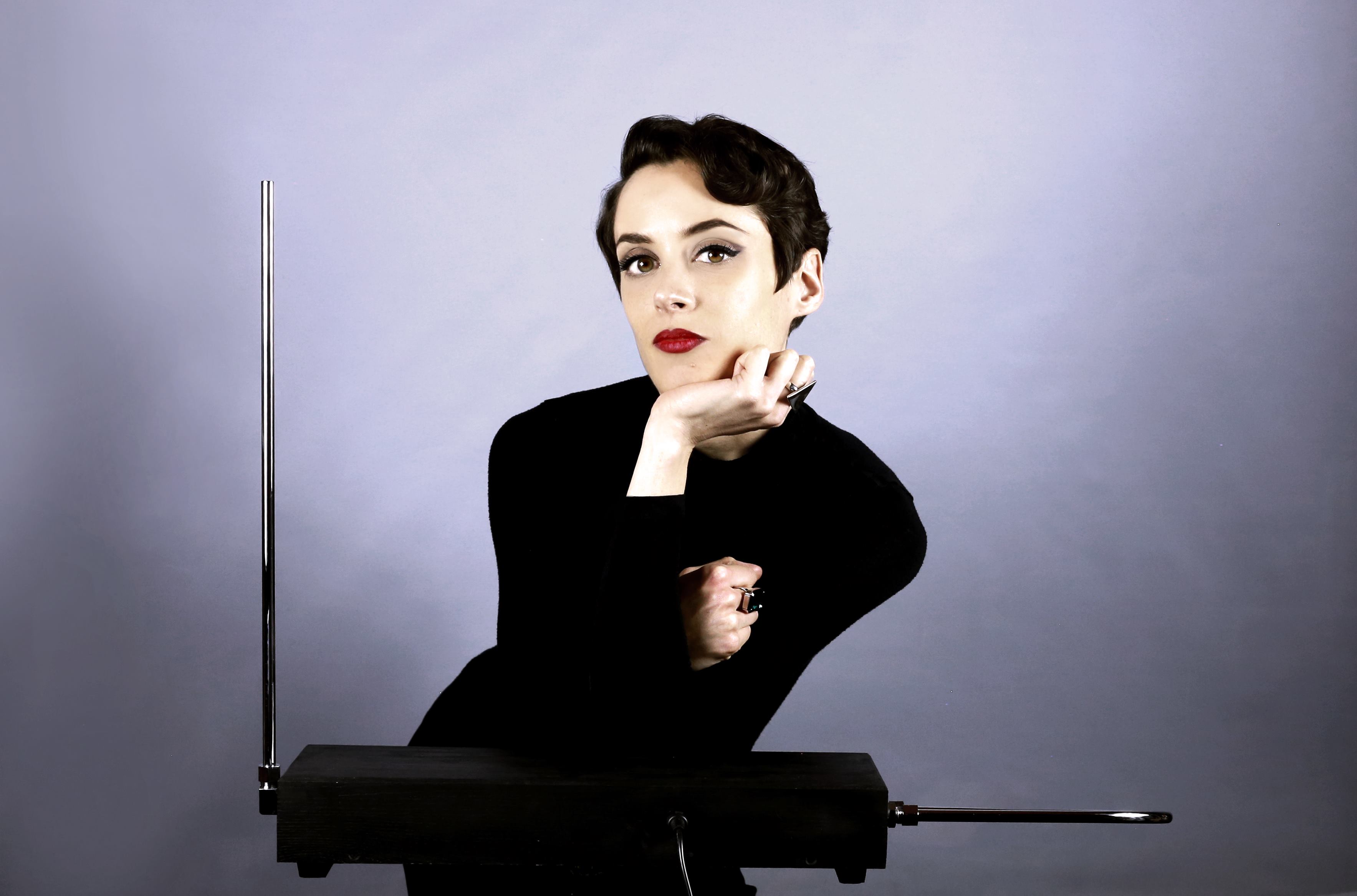 So please, if you have anything that you would like to say publicly about Clara Rockmore, her creativity and her works, – please write.

The theremin changed her life… She is still one of the most important inspiration for every thereminist. I think we owe her a lot thanks to the technic she created. This subtil « language », makes you feel more comfortable and precise. She used to tell her students to imagine butterfly’s wings at their fingertips. What else…?… when I have no word anymore, I draw.

A few years ago, when I saw this instrument on Youtube for the first time, I was too busy with other projects to focus on it seriously.
I have been introduced to the theremin on Youtube when I was searching tutorials about the musical saw (I have been playing the sound blade -the newer version of the musical saw- for ten years now). I can remember, this theremin video showed Randy George playing « la valse d’Amélie ». The sound was so closed to the musical saw and the human voice that I loved it at the first seconds. Understand that music could be played thanks to the hands movement in a blank space was really fascinating and scheming. But I really decided to deepen my knowledge about the theremin only a few years later (precisely in 2016) thanks to Armen RA.

11th February 2016, I have been totally overwhelmed by a photo of Armen RA (who is a thereminist virtuoso). When I saw this picture, I thought I saw myself… with a beautiful outfit. This is where it all began. This physical similarities kept us together and we became very special friends despite of the distance that separates us… which I regret every day. Then, he became my muse (I am a visual artist too). His art is unique and humbles me profoundly. At the beginning, tanks to my fascination for Armen, I only wanted to learn how to play the theremin in order to feel what he felt. And one day, he told me about his own experience with the theremin and how challenging it was. He told me that he loved the saw. He had already tried to play this instrument but he also said that playing the theremin was even more difficult (I can confirm now… playing the theremin is very difficult). For me, nothing is more rewarding than taking up a challenge and I thought it was time to live a new experience. So I bought an Etherwave Plus by Moog. Then, I noticed the huge scope of subtleties that offers this enthralling instrument and fell definitely in love with the theremin. Four month later, when I met Armen RA for the first time in Paris, he said : “ When I see your practice videos, I’m back to the past, when I began. You have been playing for a few month only but I know, you’ll become a really great thereminist because you never give up as most of the people do when it’s going to be difficult.” (It was before his performance at the Grand Bal of Christian Dior during a fashion week, I will never forget). These words have had a considerable impact on my motivation which was already quite huge.

Being a musician was not my primary directive at all. I have been drawing since the day when someone gave me a pen so, the goal of my life was becoming a visual artist. Consequently, I studied Art. I haven’t learnt music in an « academic » way but I have a very developed hear (as child, my hobby was reproducing all the orchestration of Mozart’s Requiem with a synthesizer/sequencer only after hearing. It was just a game but now, I think it was very useful for the future : the hear is a bit like a muscle that needs to be trained. But I’d never though that I could do anything « professional » in music until the sound blade came into my life and changed it. Indeed, I don’t « know » the music but I live it.
When I am playing the theremin, I feel like entering into a kind of transe. Now, even though I am a beginner (I started only two years ago and have been performing for one year…) I am convinced that the theremin will bring new prospects to my life.

I think I am still a beginner so, at the moment, I play arias from the classical repertoire because I think this kind of music is the best way to increase the virtuosity. I don’t know what will be my approach of the theremin in a few years but now, I am sure about something : I work hard every day to increase my level and push my limits.

I try to give all of me, practicing almost two hours a day (sometimes more). I am still having to fight against the bad stress when I have to perform but performing is a part of my life, I need it to feel good and alive.

This is another reason why I need to increase my level very fast. I believe that the technical perfection can bring me the freedom to play with my own style in the future. I am conscious, I will need a bit time… but I am confident because I really want it.

Prospects for theremin and its place in modern music space – how you see them? For what qualities you value this tool?

The theremin is used -sometimes- in rock formations or in electro music (I think of Jimmy Page from Led Zeppelin for exemple). The theremin brings a very particular dimension to the songs but most of the time, it plays only a second role as an « ambient sound» that doesn’t bring a real opportunity to explore ALL the possibilities of this wonderful instrument. The theremin can also be used as a soloist instrument, exactly like a Cello or a voice. But, the theremin is still rather rare… maybe because of the difficulty to be correctly played. To evoke the great possibilities of this instrument, I can give the example of the actual thereminists who inspire me. Some of them have a very interesting approach because they explore and create in their own way (I think of Carolina Eyck ou Coralie Ehinger for example). Then, Thorwald Jorgensen, Katika Illenyi and Armen RA are very talented soloists (and real models for me).

I began my first noises on a Jupiter 3 but I didn’t like the sound. I felt the huge difference when I bought my own theremin : an Etherwave Plus by Moog.
I would like to try other theremins to be able to compare. I really regret that Moog doesn’t make the Etherwave Pro anymore. Despite of its weight, it seems to be precise when you have to tune it and last but not least, it doesn’t need half an hour to be warm enough...

I would recommend to see Carolina Eycks’s tutorials on Youtube : they are very efficient for learning the technic. I would also sincerely recommend the theremin academies organized by Thierry Frenkel. The intensive lessons are incredibly useful and this is a perfect way to know other thereminists from other countries. By the end, I would recommend DVDs : « Moog Theremin Rockmore/Kaviny », shows the story of the instrument, it contents interviews of Bob Moog, Clara Rockmore and concerts by Clara Rockmore and Lydia Kavina.
Then, « When my Sorrow Died, the legend of Armen RA and the theremin », a very moving reportage about one of the greatest thereminist in the world. It shows how the theremin appeared as a miracle and changed his life.